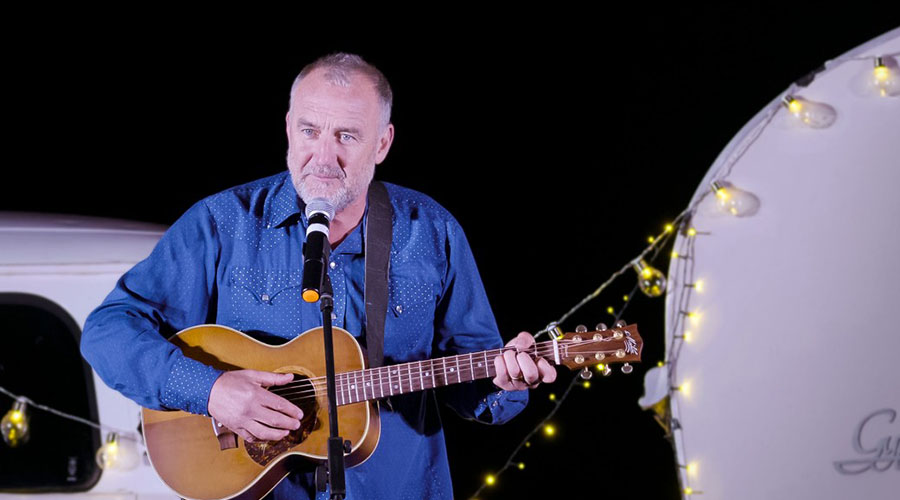 Humerus Productions invites you to join stand up genius JIMEOIN and his mates as they go off the grid in ‘WALTZING JIMEOIN’, the new television series premiering on Network 10, August 2021.

After 30 years selling out stand up shows and making audiences laugh across Australia, Jimeoin is finally going to embark on a comedy tour his way…. by making it feel like a holiday with his friends and family.

In fact, you could say the idea for ‘WALTZING JIMEOIN’ came out of a ‘bugger that’ moment, and a snap decision by Jimeoin to tour on his own terms. A working holiday with the chance to see and truly experience Australia along the way. Throw in a Kombi and a bunch of his comedian mates including Akmal, Georgie Carroll, Dane Simpson, and Emma Zammit and you’ve got one epic, not to mention hilarious adventure.

The part road trip, part travel show, part comedy tour mash up does hit a snag early on when during his first night in the bush having struggled to put up the tent, Jimeoin has an epiphany that ‘roughing it’ may not actually be for him (all the time).

Jimeoin says “I’ve always loved the idea of camping. For a night here or there. Being on tour for 30 years has meant that I’ve seen many hotels, B&B’s and many many couches – so I’m not precious about where I lay my head. But it’s nice to holiday in those eco tents or the cabins with a view by the water and do a sunset, outdoors show. Might do this forever.”

From Sydney to the Whitsundays, park to park, WALTZING JIMEOIN is the most fun road trip you’ll ever take. Visiting incredible Australian landmarks, hearing the fascinating stories of fellow holiday-makers he meets and join them front row beside the BBQ as Jimeoin strolls from his tent, cabin, or caravan to deliver the side-splitting laughs he’s famous for!

Says Jimeoin – “I just love Australia – exploring the east coast is a holiday that’s so idyllic – your kids can’t really ruin it, no matter how hard they try.”

WALTZING JIMEOIN is the debut television series for the newly created ‘Humerus, which combines the talent and expertise of award-winning Producer Josh Butt and comedy industry veteran, Artie Laing CEO of A List Entertainment .

Says Executive Producer/Series Producer Artie Laing, “We’re really excited about the future of comedy TV in Australia. Our program slate is led by comedians and having managed comedians for 30 years, and still going, we want to create more opportunities for Aussie comics to succeed on TV.”

Says Executive Producer/Series Producer Josh Butt, “It’s a privilege that our first production is with Jimeoin, as he tours Australia doing comedy — he’s a hilarious and insightful comedy legend, and the comedians he travels with are equally as funny.”

“In a year that’s all about the great Aussie road trip, it’s a symbiotic and natural fit to partner with Australia’s largest regional accommodation group G’Day Parks.”