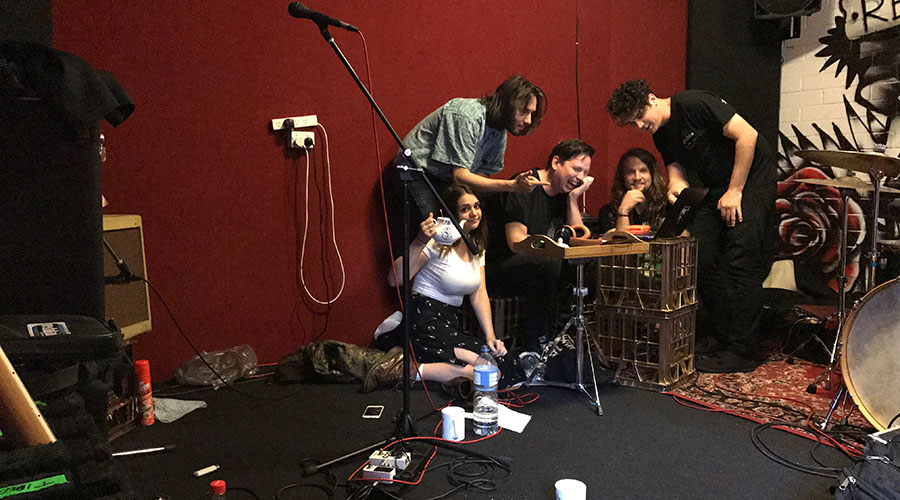 Rising Perth rockers Tired Lion, are primed to make the next big move of their career with the announcement  that they will release their highly-anticipated, debut album later in the year, as well as return to tour Europe.

The band – Sophie Hopes, Matt Tanner, Nick Vasey and Ethan Darnell – announced on social media yesterday that they will commence recording the album this week and that they have enlisted the expertise of producer and local rock figurehead in his own right, Luke Boerdam of Violent Soho frontman fame, to man the boards for the album. Boerdam also announced the pairing on his socials yesterday, saying:

“Landed in Perth and stoked to start making a record with these legends!!! The new songs are sounding sick!!  It’s got the guitar smarts of The Breeders, pulled back a little like Splendora, with some solid Basement style riffage… I can’t wait for people to hear it!”

The two parties formed a bond last year when Tired Lion supported Violent Soho on their national Australian tour, alongside The Bronx and Luca Brasi. It will be the first time in his career that Boerdam has taken the reins as the producer for another band.

The album has already been heralded by Rolling Stone as one of the ‘50 Most Anticipated Albums Of 2017’, thanks to the fact that, “over the past two years Perth’s Tired Lion have slowly transformed into one of Australia’s most promising punk acts.”

That news stands alongside the announcement that the band are set to perform on the Great Escape line up in May, before performing their first headline show at The Old Blue in London on Tuesday, March 28 and Supersonic in Paris on March 31. This round of European shows follow on from recent profiles of the band by legendary UK music outlets NME and Kerrang!, who have heralded Tired Lion as one of the key acts to keep an eye on in 2017.

Both announcements mark what will be a huge year for the former Unearthed J Award winners, who had a huge 2016 that saw them dominate the airwaves with the breakout singles, ‘Not My Friends’ and ‘Agoraphobia’; triumphantly tour Europe playing the likes of Latitude and Glastonbury festivals; return home and perform barnstorming festival sets at Splendour In The Grass, Falls Festival, Southbound, The Plot, Grass Is Greener and Yours & Owls, as well as the national Violent Soho tour; and sign with US booking agency AGI (whose roster includes the likes of The Strokes and Metallica).

Hopes also recently delighted fans by posting a video on the band’s Facebook page of herself performing a gorgeous piano cover of ‘Agoraphobia’ alongside her cat, Saikou, and her dog, Mogwai.
www.facebook.com/TiredLionBand