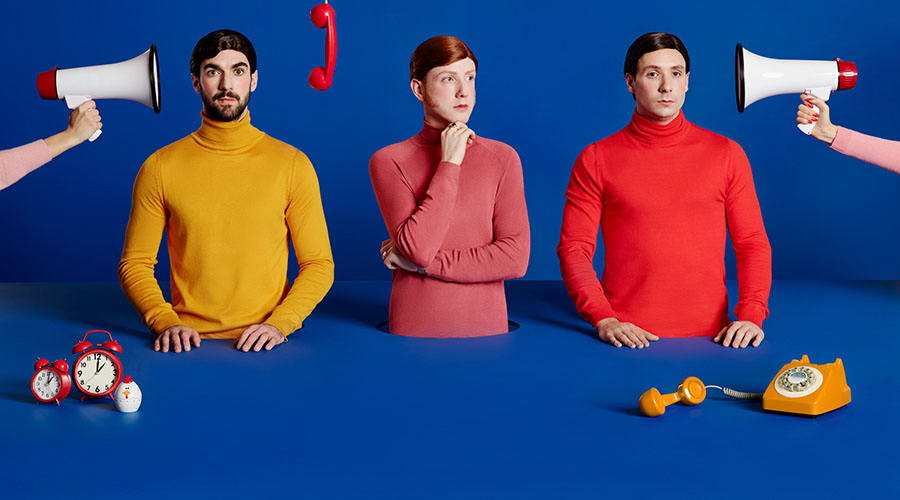 First an indie sensation, then a stadium-slaying juggernaut, now experts in the subtle art of pop seduction, Irish heroes Two Door Cinema Club are celebrating the fevered reception to their just-dropped fourth record False Alarm with a string of unmissable appointments across Australia in November.

Described by Clash as “a game-changing record for the future of indie-rock”, False Alarm was released on June 21 and signals another chapter in the impressive re-birth of a band adored for their kinetic post-punk energy, world-weary lyricisms and recent forays into Kraftwerk-esque stylized synth-pop.

Led by the unmistakably sonorous vocals of Alex Trimble and backed with vigorous ease by Sam Halliday (bass) and Kevin Baird (drums), Two Door Cinema Club have been much-loved since they burst onto the landscape in 2009 with the release of their debut Tourist History.

Tracks from that record such as ‘Undercover Martyn’ and ‘What You Know’ were adopted as anthems of a nascent movement of UK based guitar acts catapulting themselves onto the worlds stage.

Bands like The Wombats and The Maccabees also lived inside this orbit and in the late-naughties, early-aughts it became impossible to escape the kind of razor-sharp songcraft that Trimble and his cohorts were unleashing.

From these wild origins, Two Door Cinema Club have built a steady catalogue of playlistable treasures. Their second record Beacon (2011), picked up where Tourist History left off, riding huge first single ‘Sleep Alone’ all the way to Number 4 on the ARIA charts here in Australia, where the band have always enjoyed a strong following.

Next up was Gameshow, an album released on the back of a self-enforced hiatus and period of soul searching for the band.

This third release signified a sonic shift, as the band worked with long-time producer (and fellow Irishman) Jacknife Lee (U2, REM, Weezer) on a more synth dominated universe; modifications that have continued into the release of False Alarm and its sci-fi spanning singles ‘Talk’ and ‘Dirty Air’.

A perpetual radio and festival favourite in Australia, Two Door Cinema Club are garnering some of the best reviews of their career for their latest outing, with Dork raving False Alarm is ‘an album packed with more ideas than many bands manage in an entire career’.