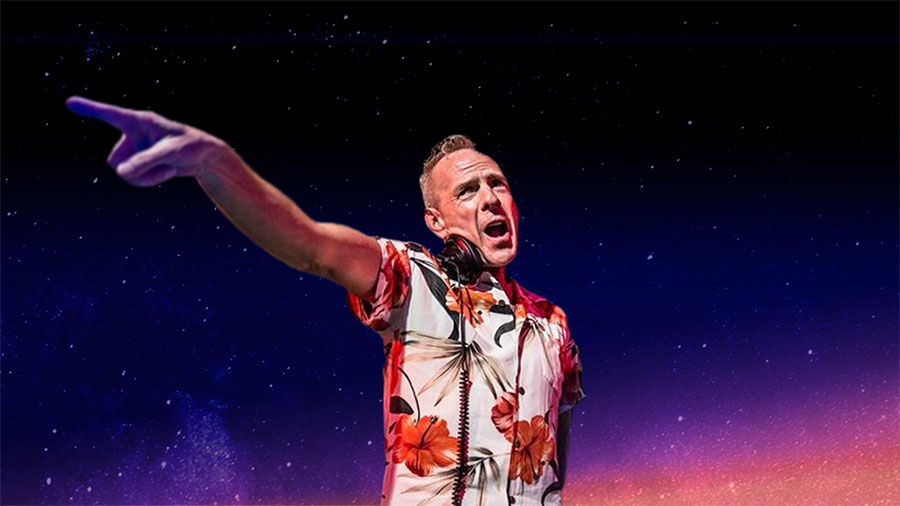 Fatboy Slim is heading down under for a run of massive outdoor headline shows this January!

You’d better be ready to ‘Eat, Sleep, Rave, Repeat’ – Frontier Touring is ecstatic to announce the return of revered DJ and prolific producer Fatboy Slim for three huge Australian dates in January 2020. The party-starting machine is responsible for some of the biggest hits of the last few decades, but it’s his uncomparable energy and true passion for live shows that makes him the icon he is. He will be joined at all shows by 2manydjs, aka David and Stephen Dewaele of Soulwax (DJ set).

These shows are a continuation of Fatboy Slim’s enormous 2019, which included a seven date sold-out UK arena tour which became some of the biggest and most immersive parties the UK has ever seen. The club sensation has since celebrated the 20th anniversary of his unforgettable tune ‘Right Here Right Now’ with a rework, ‘The Return To The Valley Of The Right Now’, also adding in a triumphant return to Ibiza in July of this year for the Pete Tong sessions at Blue Marlin, DC10 with Carl Cox, the legendary toilets at Hi and the main room at Glitterbox.

More than your average DJ set, Fatboy Slim’s sets take things to a whole new level. Iconic singles like ‘Praise You’ and ‘Weapon Of Choice’ make an obvious appearance, but it is the attention to detail in his carefully designed visuals that elevate an already stellar performance to an almost religious experience, meticulously programmed to sync up with whatever is played in the moment and transcend the gap between live music and visual accompaniments.

‘This spectacular show still has the buoyant spirit of the era, unquenched.’ – ★★★★The Guardian

‘The fact you never quite know what’s coming next with him adds to the chaotic house energy… it feels like a hedonistic, blisteringly fun evening and a job well done by Fatboy Slim.’ – Manchester Evening News

Fatboy Slim, aka Norman Cook, entered the UK acid house scene in the ‘90s. Early success came with the release of hit singles ‘Everybody Needs a 303’ and ‘Going Out of My Head’, taken from Better Living Through Chemistry. Soon after came ‘The Rockafeller Skank’, a precursor for hit album You’ve Come A Long Way Baby, which delivered his first UK #1 in ‘Praise You’, as well as club banger ‘Right Here Right Now’, which peaked at #2. Halfway Between The Gutter And The Stars followed, featuring ‘Weapon of Choice’, with an unmissable video directed by Spike Jonze and starring Christopher Walken dancing in an empty hotel lobby. It’s widely regarded as one of the best music videos of all time, having won several awards, including a Grammy for Best Music Video. Cook took things to another level again with the undeniably huge ‘Eat, Sleep, Rave, Repeat’, and more recently with massive singles like ‘Where U Iz’ and ‘Boom F**king Boom’.

With 10 MTV VMAs, two Brit Awards and a Grammy, numerous high-profile Ibiza residencies, a Beats 1 Radio Show, a record 20 consecutive years playing at Glastonbury, and even a show on The Great Wall of China, it’s no surprise Fatboy Slim has a reputation as one of the most consistently popular DJs and producers on the planet. A party lover through and through, Cook is fuelled by the joy of his audience, which becomes a feedback loop of energy at every show that sends the vibe through the roof. Fatboy Slim isn’t showing any signs of slowing down, and his upcoming Australian tour will be no exception.