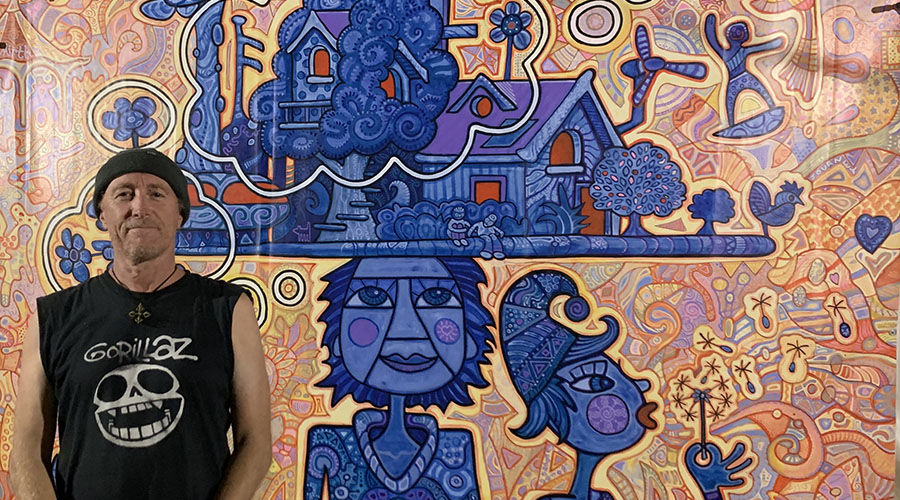 Some 300 patrons from the Woodford Folk Festival community have lent a hand in creating the largest artwork in the festival’s history.

The 4.8 by 3.4 metre canvas was unveiled on Sunday 11 August at an on-site working bee of 250 enthusiastic people and is the official poster for the 2019/20 Woodford Folk Festival.

‘Imagining a Beautiful Future’ is the theme for the next three festivals. Festival General Manager, Amanda Jackes, explains that the theme aims to assist festival programmers in integrating the thousands of events across the festival.

“While we celebrate the festival’s diversity, we see the event as one canvas, many colours – we hope the poster reflects that,” she said.

“This poster is the first panel in a triptych that aims to embody the theme and acts as a storyboard for organisers as they envision what the next three years of the festival holds.

“Having a three-year vision really pushes us to be more out there in our planning and in our imagining – we go deeper,” said Jackes.

Woodfordia’s Artist in Residence, Gavin Ryan, is the man behind Woodford Folk Festival’s posters of the last ten years. Ryan’s creative process in the past saw him holed up in his studio for months on end, pouring over hundreds of layers in large Photoshop files. This year however, he has been facilitating public mural projects in Woodfordia’s outdoors.

Ryan believes that making the switch to a hand-made, community-driven process resonates deeply with this year’s theme. What was once a solo mission has become the concerted effort of hundreds of hands.

Festival Director, Bill Hauritz, explains that this theme was chosen with the intention of counteracting some of the negative rhetoric surrounding the future of the world.

Hauritz however clarifies that, “Optimism can be a dangerous thing. We don’t want to inspire false hope, but we must be able to imagine together a brighter, more promising future if we are to have any chance of creating one.”

Ryan and his team of volunteers prepared the canvas with the linework and overall composition of his final poster design. The first round of public participation was at the 2019 Planting Festival in early May and the second, some weeks later at
Woodfordia’s Parliament Day. Both events were filled with Woodfordians eager to add their mark.

Festival patrons were given a brush, a thumb-pot of acrylic paint and an invitation to express their creativity. Each participant was briefed about the theme of the artwork and encouraged to think of a meaningful symbol or motif that, to them, expressed that subject.

Ryan explains that the palpable sense of ownership and achievement felt by all those to who stood back to survey the finished canvas was a wonderful validation of the change of process. “The wildly detailed and lusciously complex poster that has been created by a multitude of different hands is a potent example of the total being more than the sum of its parts, in the same way that Woodford Folk Festival itself is,” says Ryan.

The full programme for Woodford Folk Festival 2019/20 is scheduled for unveiling on the 12 October 2019. It is expected to comprise of 1100 programmed events across 25 stages.