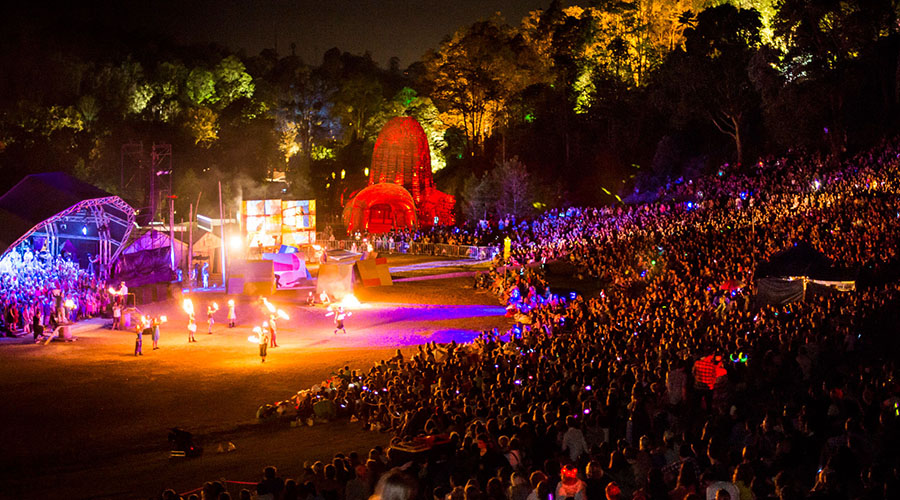 In a tent in Woodford Folk Festival’s Amphitheatre, a strange child is being born. Some of the world’s leading puppet artists and a team of volunteers are putting the finishing touches on the first of a series of giant puppets, which, over the next three years, will be the central characters in the festival’s iconic Closing Ceremony.

The show is built onsite from the ground-up, using mostly reclaimed building waste and up-cycled materials. Over six weeks, the dedicated team grows from 6 to 160 and consists of professional artists, makers and volunteers from around the world.

Ceremonies Producer, Aaron Austin-Glen explains that, “The fabric of each ceremony draws threads from all corners of the organisation. They are truly collaborative projects coming from the heart of Woodfordia.”

As always, the team have prepared a version of the Closing Ceremony that does not culminate in the burning of the main sculpture. Due to the drought and current weather conditions, the show will go ahead as planned, however the main sculpture will not be burned.  There are also plans for not using pyrotechnics or fire effects.

“This is one of our most ambitious projects to date – it’s nothing short of a gargantuan feat of artistry, hard work, resourcefulness and more than a bit of sweat,” said Ceremony Writer and Director, Alex Podger. “Without giving away too much, it is a trilogy about a strange boy called Emir, who finds an abandoned hatchling and raises it. Before too long, the boy and his bird become a youth with a phoenix and a summer of childhood adventures unfolds.”

The puppet, Emir, is a collaboration between theatrical designer Bryan Woltjen (AUS), who created the ‘Sphere People’ of last year’s show and co-created the Auryx for the 2017/18 festival; Orla Clogher (IRE) and Dave Young (ENG), known for their work with spectacle theatre company, Macnas; and Jozef Koda (HK/AUS), known for his costume work with Franco Dragone, one of Cirque du Soleil’s founding directors. Five puppets are being created for this year’s event, and the team are exploring new ways of telling folk tales through puppetry, large images, costume and effects.

This ambitious puppet creation has only been made possible with project funding from the Arts Queensland’s Queensland Arts Showcase Program Fund. General Manager Amanda Jackes thanks the Queensland Government for their ongoing support. “This funding has given our team the opportunity to work with some of the best puppet makers in the world. The impact of this is that our Australian large-scale theatre workers will have collaboration and skill development opportunities in this production that they would previously have needed to travel abroad for.”

The music is composed specifically for the event by a team of composers, songwriters and sound designers, and performed with guest artists and Woodfordia’s own orchestra and choir. 400 festival patrons learn the score each morning of the festival to play it live together, for the first and only time, on New Year’s Day.

The addition of a large all-natural lake to the festival grounds was announced only last week and has garnered an outpouring of excitement from the festival community.

“We’re thrilled to provide our Season Campers, volunteers and performers with the opportunity to swim in our beautiful Lake Gkula, although we are also aware of the irony and potential insensitivity of opening a human-made lake during a drought” said Hauritz. “Rainfalls onsite have been few and far between, but we were fortunate enough to source all the water for Lake Gkula from onsite dams and a top up from a bore.”

Ceremonies have always held a special significance for Woodford Folk Festival, as a place for annual traditions, rituals and customs. The 34th annual festival commences on 27 December and the forecast is looking very promising for patrons, with temperatures sitting below average for the duration of the festival. The Woodford Folk Festival closing ceremony is on Wednesday 1st January 2020.

‘Woodford Folk Festival is supported by the Queensland Government through Tourism and Events Queensland and features on the It’s Live! in Queensland events calendar.