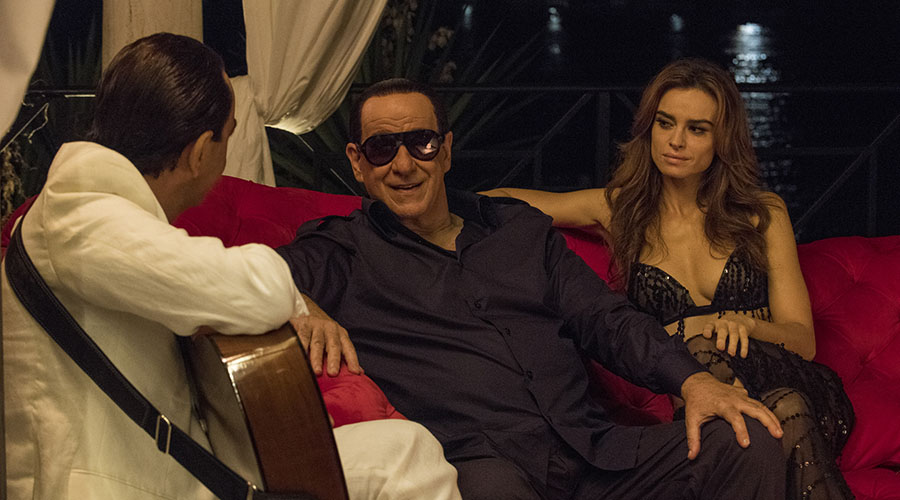 19th Lavazza Italian Film Festival to open with the Australian Premiere of Loro!

Directed by Paolo Sorrentino (The Great Beauty, The Young Pope) and starring Toni Servillo (The Great Beauty) as the controversial Italian Prime Minister Silvio Berlusconi – the most anticipated Italian film of the year, LORO, will open the 19th Lavazza Italian Film Festival nationally. Split into two parts for its Italian release, the Festival is proud to present the project in single epic form, within days of its premiere screenings at the 2018 Toronto International Film Festival.  Tickets for the Opening Night Galas are now on sale, and are expected to sell out!

Presented by Palace, the program, consisting of 37 feature films and 2 short films, celebrates cinema d’italia in all its glory – from the funny and outrageous to lavish romance, poetic drama and revealing documentaries. With 33 Australian Premieres, the Lavazza Italian Film Festival is the place to experience la dolce vita and lose yourself in the best Italian cinema on the big screen.

This year’s SPECIAL PRESENTATIONS include the 2018 winner of Best Original Screenplay at Cannes Film Festival, Alice Rohrwacher’s (The Wonders LIFF14) enchanting third film HAPPY AS LAZZARO (Lazzaro felice); and from Matteo Garrone, the director of Gomorrah comes DOGMAN – the Cannes Film Festival award-winning tale of a dog-lover in desolate Southern Italy who is driven to terrifying extremes by a violent local bully.

Closing the festival is the horror masterpiece SUSPIRIA (1977), Dario Argento’s sinister ballet academy-set tale. Still the most famous of all Italian horror movies, it can now be seen in its digitally restored glory. Four years in the making, this restoration was made from the uncut 98 minute 35mm Italian camera negative, revealing layers of unseen colour and with a remixed surround-soundtrack.

Comedy, Italian-Style is celebrated with a curated selection of the best laughs on offer from the last twelve months. Based on the hit off-Broadway play, MY BIG GAY ITALIAN WEDDING (Puoi baciare lo sposo) takes us on a heart-warming and chaotic trip to the altar as a young man travels to his conservative hometown to marry his fiancé; the biggest Italian film at the 2017 local box-office, with its feet firmly planted in the zeitgeist and winner of the 2018 Best Comedy Nastro d’Argento award LIKE A CAT ON A HIGHWAY (Come un gatto in tangenziale) sees two parents from different worlds united by a common cause, to stop their teenage children from dating!; in COUCH POTATOES (Gli sdraiati), multi-award winning director Francesca Archibugi (An Italian Name LIFF15) returns with an hilarious intergenerational comedy; Edoardo Leo (Perfect Strangers LIFF16) co-writes and Venice Film Festival award-winner Alessandro Aronadio directs JUST BELIEVE (Io c’è), about the power of believing in yourself; from the writer of Perfect Strangers comes AS NEEDED (Quanto basta), a Tuscan comedy about Arturo, a 40-year-old chef with a troubled past; from popular actor/filmmaker Carlo Verdone comes BLESSED MADNESS (Benedetta follia) as a shop-owner re-enters the dating world for the first time in 25 years; the box-office hit COUPLE THERAPY FOR CHEATERS (Terapia di coppia per amanti) sees a pair of cheaters end up on a therapist’s couch to resolve their relationship crisis; Fabio De Luigi stars as the Tax Police’s most incorruptible officer whose world is upended when he falls for an unlikely scammer in PUT NONNA IN THE FREEZER (Metti la nonna in freezer), from the writer of Welcome to the North (LIFF12); Angela and Franca run away from their boring retirement home in Rome to fabulous Venice in NONNAS ON THE RUN (Niente di serio), a life-affirming tale starring screen icon Claudia Cardinale; and in the final episode of the hit saga I CAN QUIT WHENEVER I WANT 3 (Smetto quando voglio: ad honorem), the brilliant academics reunite and must team up with their arch-nemesis to stop a professor’s diabolical plan.

The best Italian drama, international award-winners and big-name festival favourites will hit the screen in Lights, drama, action! Two boys from the fringes of Rome’s underworld are pulled in deeper in BOYS CRY (La terra dell’abbastanza); a young girl is torn between her adoptive mother (Valeria Golino) and her birth mother, (Alba Rohrwacher) in DAUGHTER OF MINE (Figlia mia), the acclaimed Sardinian-set drama from Laura Bispuri (Sworn Virgin); winner of the Human Rights Award at Venice, THE ORDER OF THINGS (L’ordine delle cose) is an absorbing drama from the director of Shun Li and the Poet (LIFF12), which follows an immigration agent torn between the job and his humanity; actor and director Valeria Golino (Rain Man), returns with EUPHORIA (Euforia), a riveting drama about two brothers forced back into each other’s lives that premiered in Un Certain Regard at this year’s Cannes;  based on the bestselling novel, THE GIRL IN THE FOG (La ragazza nella nebbia) is a gripping thriller which follows the enigmatic Detective Vogel (Toni Servillo) as he investigates the sudden disappearance of a young girl; WATER AND SUGAR: CARLO DI PALMA, THE COLOURS OF LIFE (Acqua e zucchero: carlo di palma, I colori della vita) is a loving documentary which chronicles visionary Italian cinematographer Carlo Di Palma’s extraordinary work for such directors as Elio Petri, Michelangelo Antonioni and Woody Allen; regrets of the past are faced in WHERE I’VE NEVER LIVED (Dove non ho mai abitato) as Francesca (French star Emmanuelle Devos) a 50-year-old architect in a loveless marriage returns home; an unexpected storm strands a family gathered to celebrate their grandparents’ anniversary in THERE’S NO PLACE LIKE HOME (A casa tutti bene) the star-studded highlight from the writer of Perfect Strangers and director Gabriele Muccino (The Pursuit of Happyness), co-starring Pierfrancesco Favino; MADE IN ITALY is Italian singer Luciano Ligabue’s multi-award winning smash-hit, based on his eponymous concept album and starring Kasia Smutniak (Perfect Strangers); set in the hills of Conegliano, Veneto, THE LAST PROSECCO (Finché c’è prosecco c’è speranza) is a comedic mystery which follows a seemingly bumbling inspector (Giuseppe Battiston) who tries to solve the death of a local Prosecco wine maker; in A WOMAN’S NAME (Nome di donna), a young woman who is harassed by her manager chooses to break the silence and rebel in this timely #MeToo drama from director Marco Tullio Giordana; a huge hit with audiences and critics alike during this year’s Directors’ Fortnight at Cannes, LUCIA’S GRACE (Troppa grazia) sees Alba Rohrwacher star as a land surveyor who is visited by a woman claiming to be the Virgin Mary; dumped by his girlfriend and finding himself stranded on different couches at friends’ places, Guido tries to transform his drift into an opportunity for a new beginning in THE GUEST (L’ospite); and in Letizia Lamartire’s debut drama WE’LL BE YOUNG AND BEAUTIFUL (Saremo giovani e bellissimi) Isabella (Barbora Bobulova), a pop-star in the 90s, will have her relationship with her son tested.

This year the Lavazza Italian Film Festival will celebrate the work of renowned and much lauded Turkish-Italian director and scriptwriter FERZAN ÖZPETEK with a special spotlight on his work including: the lush, mystery NAPLES IN VEILS (Napoli velata) in which a medical examiner has a carnal affair with a man who later ends up on her examining table, starring Giovanna Mezzogiorno and Alessandro Borghi (I Was a Dreamer LIFF17); winner of Best Film at the 2003 Italian Academy Awards FACING WINDOWS (La finestra di fronte) stars Giovanna Mezzogiorno and Raoul Bova in a tale of a woman stuck in a failing marriage and the Holocaust survivor she cares for; the 2001 Italian Golden Globe winner IGNORANT FAIRIES (Le fate ignoranti), which follows a woman who befriends her husband’s lover after she finds out about his affair (starring Margherita Buy and Stefano Accorsi); and one of Ferzan Özpetek’s most awarded films, LOOSE CANNONS (Mine vaganti) starring Riccardo Scamarcio, which is an amiable comedy about a son’s journey home to southern Italy, to finally come out to his family.