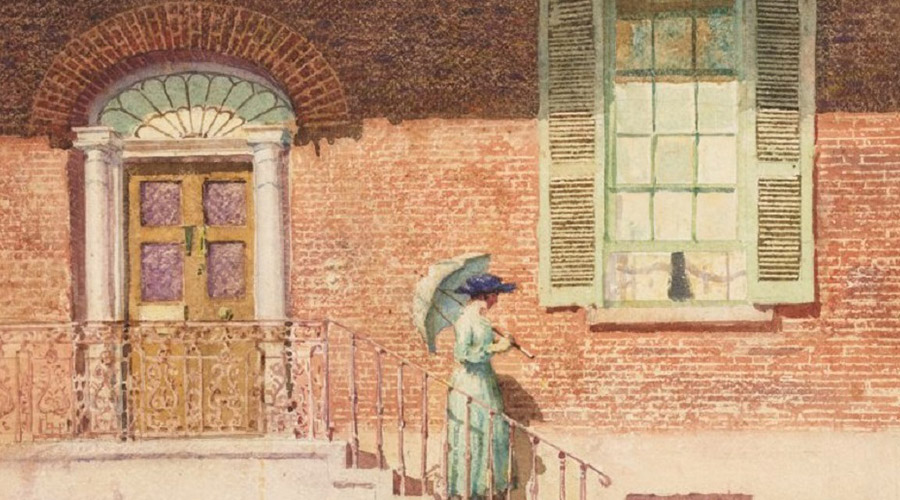 If art collections have parents, William (Bill) and Marion Bolton were father and mother to the Lionel Lindsay Gallery and Library Collection in Toowoomba, one of the most outstanding collections in regional Australia and of national significance.

This year the Lionel Lindsay Gallery and Library Collection celebrates its 60th anniversary with anew exhibition, Bill Bolton’s Vision – 60 Years On at Toowoomba Regional Art Gallery which officially opened on Saturday and runs through until July 21. Special guest Nick Mitzevich, the Director of the National Gallery of Australia and a Trustee of the Lionel Lindsay Gallery and Library was on hand to mark the opening.

This visionary collection contains over 400 works of art with extensive holdings of Lionel Lindsay’s internationally-renowned works on paper and masterworks by leading artists including Rupert Bunny, Frederick McCubbin, Arthur Streeton and Tom Roberts. The library collection, with some 3,000 manuscripts, maps and books (including many rare and first editions), is an exceptional collection that presents a unique snapshot of Australian history and literature. A series of events, tours and special hostings at the gallery will be held throughout the exhibition.

Established by Toowoomba business and cultural identities W.R.F. (Bill) and Marion Bolton in 1959, and opened by Prime Minister Robert Menzies, it represents both the tastes and cultural interests of the Boltons and their desire to celebrate the work of Australian artists and writers as well as early European explorers and cartographers of Australia.

The art gallery and library were named in honour of leading Australian artist Lionel Lindsay with whom the Boltons developed a close friendship after greatly admiring his work. Its strength is that it was lovingly and passionately assembled and is therefore a highly unique collection.

Bill and Marion’s passion for sharing the collection was brought to fruition in 1959 when The Lionel Lindsay Art Gallery and Library was officially opened in Toowoomba by Prime Minister Robert Menzies. Since 1994 it has had its home at Toowoomba Regional Art Gallery and key holdings have been loaned to several regional and state galleries, the State Library of Queensland and the National Gallery of Australia. The Boltons were prominent in the cultural and business life of Toowoomba, and this collection, held in trust, has the goal of enriching the cultural life of Toowoomba region and is an extraordinarily generous legacy for the community and for visitors from around the world.

Bill’s nationalist vision was particularly inspired by the artist Lionel Lindsay (1874-1961) and the writer Henry Lawson (1867-1922), and he wanted visitors, especially, in his words, ‘girls and boys of the old town of Toowoomba’, to ‘catch the fire of Lindsay and Lawson.’

After Bill’s death in 1973, Marion maintained her care for the collection. This included increasing its holdings, welcoming and guiding visitors, and answering inquirers, whether in person, by letter or by telephone. When it seemed that the collection was going to be permanently ‘lost’ to Brisbane, she helped to lead the way to have it restored to Toowoomba and rehoused in a purpose-built facility. That facility, Toowoomba Regional Art Gallery, has housed, conserved, exhibited and given free public access to the Lindsay Collection since shortly after its own official opening on 19 March 1994.

Sixty years later the Boltons’ legacy is enthusiastically supported by members of their family through the Lionel Lindsay Gallery and Library Trust, which carries the light of their philanthropic endeavours.

Their son David Bolton is Chair of the Lionel Lindsay Gallery and Library Trust and lives in Brisbane.

The exhibition has been curated by Jayson Althofer.