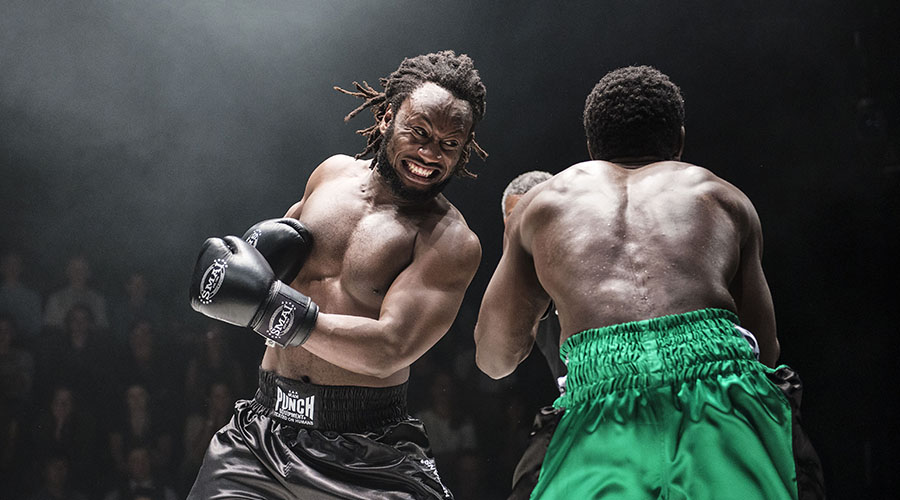 The four-time Helpmann nominated production, which received its premiere at La Boite’s Roundhouse Theatre for Brisbane Festival 2015, is adrenaline-pumping, full contact theatre, inspired by Fidel’s remarkable own story story and those of people he has known.

It tells the story of Isa, a young Congolese boxer blazing an impressive career between the ropes. Gearing up for the national title fight, Isa soon discovers it’s not just his opponents he has to outdo, but the demons from his torturous past as a boy soldier.

“Prize Fighter is a mythical story inspired by my personal experiences of these wars, and resonates around trauma from family loss and motivations of the Democratic Republic of Congo.”

La Boite Artistic Director and Prize Fighter director Todd MacDonald said the story was not about statistics, but about the unspoken realities of the Congo.

“Part of this work reflects Future’s story; his history. Part is a fiction, but the stories are real and everything in this work derived from real situations that Future experienced directly or indirectly,” MacDonald said.

“Future’s incredible debut play captured our imagination and his energy and positivity infected us immediately.

“La Boite is committed to creating new Australian plays by new Australian voices. We worked with Future to bring this incredible story to stage – and we couldn’t be more proud to now take it to new audiences across the country. And what a story Prize Fighter tells – it will inevitably enrich people’s lives in a very profound and lasting way.”

The 9-stop tour kicks off at Darwin Festival 20 – 26 August and takes in Townsville, Newcastle, Queanbeyan, Geelong, Northcote, Narre Warren Frankston and Merrigong, plus a return to South-East Queensland for a strictly limited run at Logan Entertainment Centre 13 – 14 September.

For tickets and information, visit laboite.com.au