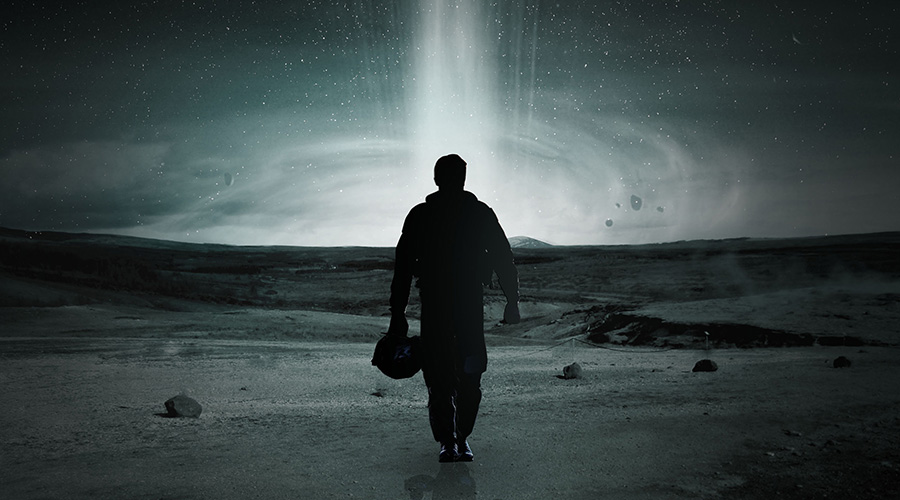 It’s the near future and ‘Mission Control’ has been taken down (presumably by a computer virus) and a blight is destroying our food crops.

Environmental disaster is coming and our days are numbered on Mother Earth. Unfortunately the world is also consumed with an incongruous mixture of hyper-cynicism, conspiracy and hopeless optimism: living day to day, hoping for the best, shunning technology; existing in a perpetual state of damage control, rather than seeking new horizons. In the words of traumatised ex-test pilot, Cooper (Matthew McConaughey), we have become caretakers rather than explorers and pioneers. In what appears to be almost an adaptation of the Queen song ‘39, Cooper leaves his loved ones behind to grow old (relatively) while he travels to another galaxy in search of a habitable world.

Now I’m no astrophysicist but science is dangerous to this film and I’m sure many a diatribe will be spewed forth debunking the film’s silly notions of science, as was the case with Gravity. But there’s a reason why science is bent in these types of films and that’s because the reality is BORING! And like Gravity, to get hung up on the science anomalies in this film is missing the point somewhat. Film is a creative medium and this is, after all, a science fiction story about how love transcends dimensions of time and space, how we give primacy to our own at the expense of the larger group, and how we willingly pervert all our reason in order to justify our personal hierarchy of priorities. It is not a textbook on space travel.

After landing the supporting role in Robert Zemeckis’ Contact, Matthew McConaughey now scores the starring role in Christopher Nolan’s film of a similar idea. And Contact isn’t the only nod here. The film is at times reminiscent of the Coens’ A Serious Man in its attempts to reconcile the supernatural with the scientific; and, most obviously, 2001: A Space Odyssey as the film descends into abstract WTFedness in its closing chapter. The latter is a conceptual over-reach that perhaps could have worked with a little more pre-laid ground work in Jonathan Nolan’s mostly impressive script. As it’s presented here, however, it’s more than a little hard to swallow.

Where it comes up short in its abstract conceptualisations, it succeeds admirably at its emotional core. The depiction of Cooper’s departure from his family as he embarks on his odyssey is absolutely heart-breaking; an emotional touchstone in the film that will have devastating personal consequences for all involved (not to mention us, the audience). And it’s a credit to the performances of all involved that this characteristic of the film is so engrossing.

Interstellar is a lesser entry into Nolan’s canon of cerebro-films – Memento, The Prestige and Inception are all better films. Despite its ambitious attempts, it is probably more on par with Insomnia but, regardless, other directors would kill to have ‘lesser’ films as good as this.