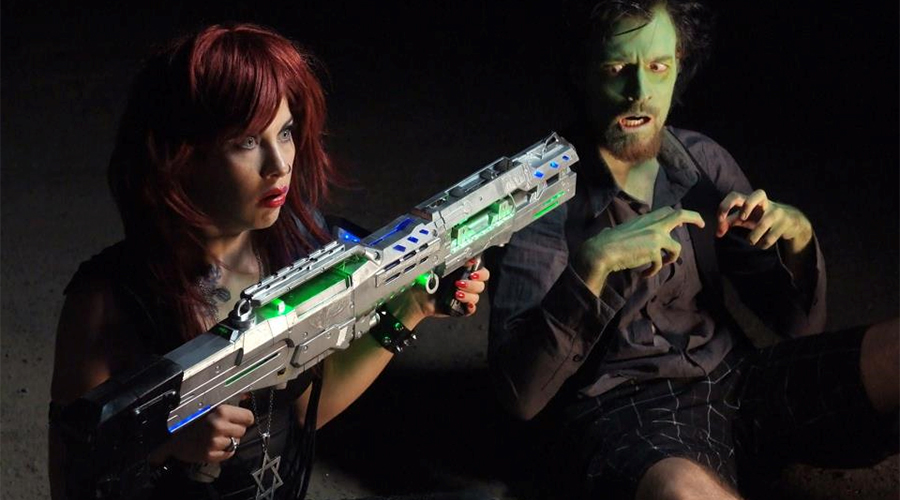 After a close encounter in her tender years, Andi (Rita Artman – also writer and producer) has her belief in extra terrestrial life confirmed and also (apparently) develops Otherworldly Cognitive Powers™. Seventeen years later, while performing with her crap band to a mostly empty room and alienating what few fans they do have with her persistent harping on about visitors from outer space, the unthinkable happens, Australia actually gets invaded by aliens! Except Tasmania, strangely, they don’t invade Tasmania… or the rest of the world.

So it falls upon Andi, her absent band mate (director, Jo Bauer), their bouncer (Lawrence Silver), their bored videographer (Tamara McLaughlin) and her geekish brother (Doug Hatch) to save the world… sorry… Australia (except Tasmania) from the alien onslaught. Low budget hijinks ensue.

Tim Burton’s Mars Attacks did the cheap sci-fi spoof for $80M back in 1996. As Dolly Parton once said, “It costs a lot of money to look this cheap.”

It’s a shame Brisbane director/writer, Joe Bauer, was just a toddler back then because he could have saved Warner Bros a big wad of cash! With Australiens, Bauer has effectively achieved the same thing for a few grand! This is not to diminish how difficult it must have been for him to scrape together these funds here in sleepy ol’ Brisbane; especially as our beloved film commissions have an aversion to funding anything which has the word ‘fun’ in their brief. But because Bauer did actually produce his film for peanuts, it has an air of authenticity about it that Burton could never realistically achieve.

Australiens exhibits a level of frivolity and ‘Australian-ness’ sorely lacking in contemporary mainstream Australian movies – if, indeed, there is even such a thing as a ‘mainstream’ Australian movie anymore. Our cousins across the Tasman still have it – I submit Taika Waititi’s Hunt For The Wilderpeople as evidence, but Australian cinema has become so serious over the last couple of decades. Australiens, then, comes as a breath of fresh air, reminding us that we are a people who still don’t mind a good joke now and then.

The film has found success on the festival circuit and this is no surprise – Australiens is a ‘festival film’ through and through. The cheese is sliced thick, the dialogue is corny and the performances are on the hammy side but this contributes to its ‘budget’ charm. These are attributes that appeal to the festival circuit. There is a quality to Artman and Bauer’s writing, however, which sees all the comic strands established in the opening act converge and come to fruition nicely in the final stages, which make sticking it out to the end a rewarding endeavour.

Balancing out the over-the-top schlocky action are more nuanced performances from the mature cast: Emma Randall and Rob Jenkins (both alumni from the Spierig Bros’ Undead), and Caroline Bell (co-producer) and Paul Adams, who collectively provide a stabilising influence to the film in it’s final chapters.

Sadly, Australiens is too small a film to find at your local multiplex so you’ll need to source it from your preferred DVD retailer or on line. So grab a bunch of friends and a bunch of beers and enjoy a night in.